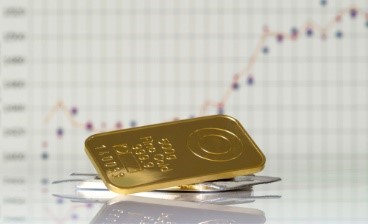 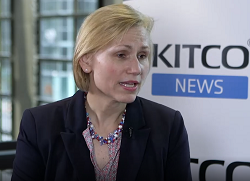 (Kitco News) – Don’t expect volatility in the gold market to go away anytime soon, as one market strategist expects the precious metal to trade in a fairly wide range through 2021 as turmoil continues to dominate financial markets.

In a recent telephone interview with Kitco News, Kristina Hooper, chief investment officer at Invesco, said that she sees gold prices trading in a fairly wide range with support around $1,800 an ounce and resistance at $2,200 an ounce.

Hooper’s comments come as gold tries to find direction while being caught trading around $1,900 an ounce.
goldAlthough Hooper said that she sees potential for higher gold price, the market still needs a catalyst to drive it to its upper boundaries. As to what will be the spark to drive gold prices back to record highs, Hooper said that she will be watching the election results fairly closely.

Although Democratic candidate Joe Biden is currently leading in the polls ahead of the Nov. 3 election. Hooper said that you can’t discount Republican candidate Donald Trump getting a second term. Hooper added that whomever wins, investors should expect that the results will be contested, driving political uncertainty and gold prices higher.

Hooper added that President Donald Trump would probably be the best candidate for the gold market as his victory will lead to further geopolitical turmoil.

“Donald Trump in general has been better for gold because of his unpredictability and in particular, his unpredictability when it comes to creating geopolitical risk,” she said. “But it’s not to say that Joe Biden is going to cause gold to fall dramatically. I just don’t think he has as much to offer in terms of catalysts for gold moving higher.”

Looking past the election, Hooper said that while she doesn’t expect to see significantly lower gold prices, the precious metal could struggle for direction without a strong safe-haven bid.

Going forward, even with the government expected to pass a new aid package before the end of the year, Hooper said that the U.S. economy will see only marginal growth until at least the summer of 2021, until the COVID-19 pandemic is under control.

This environment of meager growth will keep inflation pressure muted, which means real interest rates might not go much lower than current levels, Hooper said.

Hooper said that even with new stimulus measures, the U.S. and global economies won’t significantly recover until there is a vaccine for the coronavirus, which some health officials say won’t be widely available until the summer next year.

However, once the global economy starts to pick up that is when investors should start to pay attention to inflation fears and that will be an important factor for gold.