Gold Continued to trade lower while silver showed strength for a second straight week. Gold is barely hanging on, holding support around $1,770/oz. If this breaks, we will see lower gold prices. Selling feels exhausted in gold and gold stocks, but this doesn’t mean the current downtrend won’t continue. Earnings season is in full swing and will remain so for the next couple of weeks.

Bluestone Resources: Reported drill results from its 2020 drill program completed in the south zone of the Cerro Blanco project. Highlights from four underground and ten surface drill holes include:

CEO Jack Lundin commented, “the nature of the Cerro Blanco deposit has presented us the opportunity to look into alternative development options, which the company is finalizing internally and will be updating the market within the next few weeks.” 2020 drill results, such as those included in this press release, continue to yield high-grade shallow intercepts. It remains to be seen how this will be included in the mine plan. 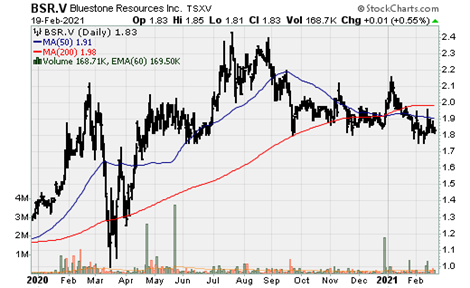 First Majestic Silver: Announced Q4 and full-year financial results. The company produced 3.45m oz. Ag in Q4 and 11.6m oz. for the full-year. Full-year AISC totaled $13.92/oz. ($15.92/oz. in Q4) and the company generated operating cash flow of $107.3m. The company’s cash position is significant at $238.6m. The company also announced the inaugural dividend policy before year-end 2020, which is expected to be paid in May.

GoldMining Inc: Announced its subsidiary, Gold Royalty Corp, has launched a roadshow for the proposed IPO of its units. Gold Royalty Corp is offering up to 6m shares under the IPO price of $5/share. Each Unit will comprise one common share of GRC and one-half of a warrant to purchase a common share. Each full-warrant will entitle the holder thereof to acquire one common share for US$7.50 for three years. The royalty space is crowded; however, there will be material optionality in God Royalty Corp as it will go public with royalties on 17 projects.

Gran Colombia: The company announced it expects to produce 200-220k oz. Au in 2021 from its Segovia operations. The company declared the next monthly dividend of C$0.015/share.

There is significant optionality from both San Sebastian and Midas/Fire Creek/Hollister. 2021 exploration will follow up on high-grade intercepts that have the potential to expand or develop new deposits. Some of these include Midas’ Green Racer Sinter target and San Sebastian’s El Bronco, El Tigre, and El Toro veins.

IAMGOLD: Reported Q4 and full-year 2020 results. In 2020, the company produced 653k oz. Au @ AISC of $1,232/oz. IAMGOLD generated $368.6m in operating cash flow, roughly the same as 2019. IAMGOLD maintains a strong balance sheet with cash and equivalents of $986.1m. In 2021, the company guided for gold production of 630-700k oz. while advancing its growth projects (Cote Gold and Boto). IAMGOLD has one of the most robust production growth profiles amongst mid-tier producers, with a 3yr growth profile of 40-80%. The high-cost producer will see costs fall considerably when the Cote project comes online.

Jaguar Mining: announce two discoveries at the Corrego Brandao (CB) and Zona Basal (ZB) targets. The Company’s expanded exploration program in the Iron Quadrangle, announced September 2020, reports early success at the two targets with important oxide intersections and with the potential to host sulphide mineralization extending to depth. CB is near the Caete mill complex, and ZB is near the Turmalina mine and mill.

Nomad Royalty: Reported Q4 and full-year results. Attributable production in Q4 was 2.75k oz. Au and 64k oz. Ag and 11.47k oz. Au and 217k oz. Ag for the full-year. The company ended the quarter with $22m in cash. In 2020, Nomad acquired some key royalties to support long-term growth. Nomad should see attributable production growth in 2021 due to the Blyvoor Gold Stream and no suspension of operations on assets in which it owns royalties.

Novo Resources: Announced that it has poured its first gold bar from the Company’s Beatons Creek gold project in Western Australia. This is just the start as Novo has several nearby projects, Purdy’s Reward, Comet Well, and others. Novo has a prospective land package of approx. 14k Km2  in the Pilbara.

Osisko Mining: Announced an updated mineral resource estimate (MRE) at what is one of the most exciting development projects in Canada, Windfall. M&I and Inferred resources increased to 1.86m oz. @ 9.6 g/t and 4.24m oz. @ 8 g/t. This excludes 100k meters of drilling completed since the cutoff date, with an ongoing 200k meter drill program expected to be completed in Q3 2021. Following the completion of the infill drill program, a feasibility study (FS) will be undertaken. The FS results will show improvement over the PEA, likely both in terms of annual production and mine life. It is likely average annual production is close to 300k oz. +/- 25k oz. as grades have trended higher and the higher-grade Lynx zone (11.3 g/t) remains open down plunge.

Pan-American Silver: Reported Q4 and full-year 2020 operating and financial results. Despite a challenging year due to CV-19 related mining suspensions and deferred capital programs, the company generated record operating cash flow both in Q4 and the full year at $170.6m and $462.3m. In 2020, the company produced 17.3m oz. Ag and 522.4k oz. Au @ AISC of $11.38/oz. and $1,011/oz. Costs in 2021 will be elevated due to stripping activities at its large gold operations and lower output and higher costs at La Colorada. At year-end, the company had cash and equivalents of $279m, working capital of $495m, and nothing is drawn on its revolving credit facility.

SSR Mining: Reported Q4 and year-end 2020 results. Q4 was the first full quarter of operations following the acquisition of Alacer Gold. The results were robust with Q4 production of 220k AuEq oz. produced at AISC of $976/oz., generating $157m in free cash flow and $217m in operating cash flow. SSR also announced its first quarterly dividend ($0.05/share). SSR maintains a strong balance sheet with $897m in cash. 2021 guidance is for production of 720-800 AuEq oz. @ AISC of $1,050-$1,110/oz. In 2021, AISC will remain elevated despite a full year of production from Copler, as AISC is expected to increase at Marigold and Puna in 2021. 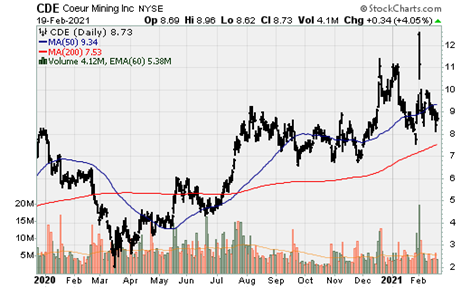