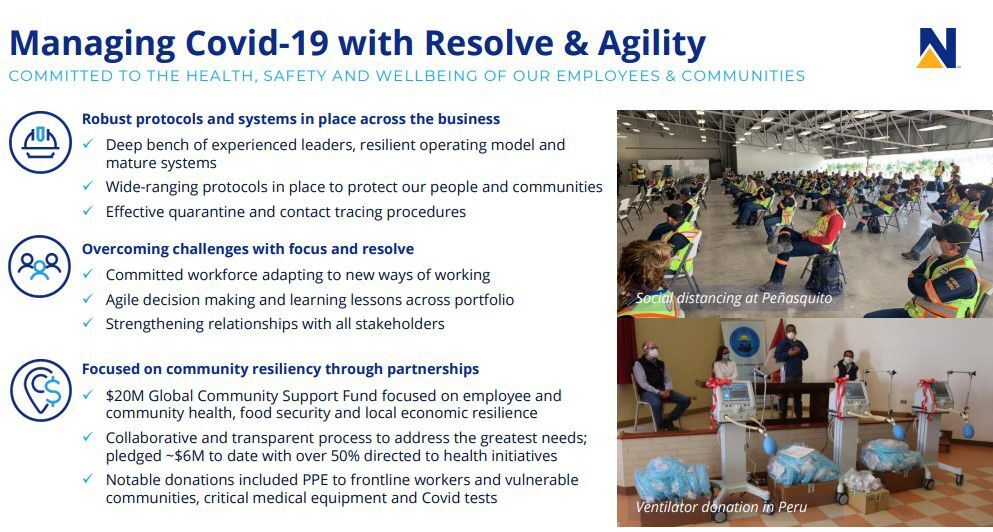 A company graphic details how Newmont Corp. has managed the COVID-19 pandemic.

Newmont’s outlook reflects increasing gold production and ongoing investment in its operating assets and most promising growth prospects. The company has included Ahafo North and Yanacocha Sulfides in its outlook for the first time as the development projects are expected to reach execution stage in 2021. Additional development projects that have not reached execution stage represent upside to guidance. All production, cost and capital figures assume a $1,200-per-ounce gold price.

Newmont’s 2021 and longer-term outlook assumes operations continue without major COVID-related interruptions. Newmont continues to maintain wide-ranging protective measures for its workforce and neighboring communities, including screening, physical distancing, deep cleaning and avoiding exposure for at-risk individuals. If at any point the company determines that continuing operations poses an increased risk to our workforce or host communities, it will reduce operational activities up to, and including, care and maintenance and management of critical environmental systems. Please see cautionary statement in the end notes for additional information.

Your membership makes our reporting possible.

Newmont’s outlook assumes a $1,200 per ounce gold price, $22 per ounce silver price, $2.75 per pound copper price, $1.05 per pound zinc price, $0.90 per pound lead price, $0.75 USD/AUD exchange rate, $0.77 USD/CAD exchange rate and $50 per barrel WTI oil price. Assuming a 35% incremental tax rate, a $100 per ounce increase in gold price would deliver an expected $400 million improvement in attributable free cash flow. Included within the attributable free cash flow sensitivity is a royalty impact of approximately $20 million (or $3 per ounce) for every $100 per ounce change in gold price.

Newmont’s capital-efficient project pipeline supports stable production with improving margins and mine life. Funding for the current development capital project Tanami Expansion 2 has been approved and the project is in execution stage. The company has included the Ahafo North and Yanacocha Sulfides projects in its outlook as the development projects are expected to reach execution stage in 2021, but have not yet been approved for full funding. Additional projects not listed below represent incremental improvements to the company’s outlook.

• Tanami Expansion 2 (Australia) secures Tanami’s future as a long-life, low-cost producer with potential to extend mine life beyond 2040 through the addition of a 1,460 meter hoisting shaft and supporting infrastructure to achieve 3.5 million tonnes per year of production and provide a platform for future growth. The expansion is expected to increase average annual gold production by approximately 150,000 to 200,000 ounces per year for the first five years and is expected to reduce operating costs by approximately 10 percent.

• Ahafo North (Africa) expands our existing footprint in Ghana with four open pit mines and a stand-alone mill located approximately 30 kilometers from the Company’s Ahafo South operations. An investment decision is expected in the

first half of 2021 and the project is expected to add 300,000 ounces per year with all-in sustaining costs between $600 to $700 per ounce for the first five full years of production (2024-2028), with estimated capital costs of between $700 and $800 million. Ahafo North is the best unmined gold deposit in West Africa with approximately 3.5 million ounces of reserves and more than 1 million ounces of Indicated and Inferred Resource and significant upside potential to extend Ahafo North’s current 13-year mine life.

• Yanacocha Sulfides (South America) will develop the first phase of sulfide deposits and an integrated processing circuit, including an autoclave to process gold, copper and silver feedstock. The project is expected to add 500,000 gold equivalent ounces per year with all-in sustaining costs between $700 to $800 per ounce for the first five full years of production (2026-2030). An investment decision is expected in 2021 with a three year development period and estimated capital costs of approximately $2 billion. The first phase focuses on developing the Yanacocha Verde and Chaquicocha deposits to extend Yanacocha’s operations beyond 2040 with second and third phases having the potential to extend life for multiple decades.

Get local news delivered to your inbox!