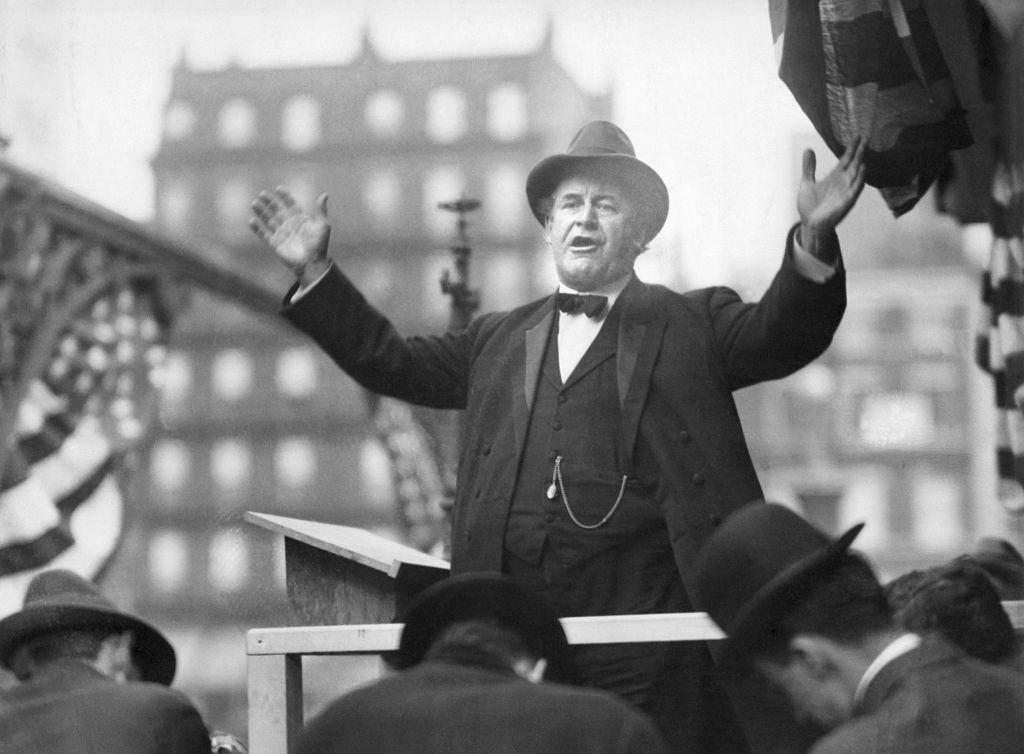 When the silver price suddenly rallied earlier this week to an eight-year high, and market analysts speculated WallStreetBets’ Reddit army of retail investors was behind the move, a few commentators quipped that William Jennings Bryan would have been proud.

Well, as you might vaguely recall from your high school AP American history class, Bryan was the original anti–Wall Street populist. Politician, orator, and lawyer (he famously sparred with legal eagle Clarence Darrow in the Scopes Monkey Trial), Bryan became hugely influential in the late 19th century in part by championing silver as an alternative to the gold standard.

It was Bryan, then a 36-year-old former Nebraska congressman, who secured the Democratic nomination for President in 1896, emerging from a crowded pack of candidates at the party’s national convention after he mesmerized attendees with a blistering speech attacking the gold standard, concluding with its famous enjoinder that humanity should “not be crucified upon a cross of gold.”

History may not repeat, but it frequently rhymes, and there are parallels between Bryan’s pro-silver populism and the WallStreetBets’ silver rally. The Reddit crowd was allegedly driving up silver’s price in an attempt to put a squeeze on Wall Street hedge funds that have shorted the metal. (Well, that’s one theory of what drove the silver price to a 10-year high on Monday. There are others too. And some WallStreetBets members deny they are behind silver’s rise. The following day, the metal sank back 5% and remained choppy throughout the week.) Bryan and his fellow “Free Silverites” wanted to land a blow to Northeastern elites and Wall Street bankers, a gesture that the WallStreetBets folks might recognize.

The war between Bryan’s “Free Silverites” and the advocates of “Sound Money”—as the gold standard proponents termed themselves—was waged in vicious editorial cartoons. Combining humor, text, and images to mock opponents and score political points, they were very much the forerunners of the Internet memes WallStreetBets has used in its fight against Big Finance.

But why silver? The tale of how being bullish on silver became associated with populism is complicated, but worth retelling: In 1791, as the U.S. was first establishing its own money, Treasury Secretary Alexander Hamilton (an upstart icon as any fan of the musical knows) argued that the dollar should be a bimetallic currency, exchangeable for a set amount of gold, or a larger amount of silver, with the ratio between the two metals fixed at 15:1. The newly established U.S. Mint would strike coins made of both metals. He believed that using two metals instead of one would make the dollar more stable. (Hamilton does not seem to have been well-versed in Gresham’s Law, despite Britain’s own failed attempts at bimetallism in the decades prior to the American Revolution.)

There were problems with the dual-metal standard almost from get-go, when the Napoleanic Wars drove up the price for gold relative to silver. These problems became worse as the 19th century progressed: The California Gold Rush drove the price of gold down relative to silver and caused silver coins to be worth more than their face value. This led to a large volume of silver coins being taken out of circulation and exported to be melted down for the underlying metal. In response, Congress in 1853 voted to reduce the amount of silver metal in U.S. coins. This made it uneconomical to export silver coin, but also unprofitable for silver miners to present their bullion at the U.S. Mint to be coined. In practice, the legislation put the U.S. on the gold standard.

During the Civil War, the vast expense of the war effort resulted in the U.S. temporarily moving away from any specie currency to an economy based almost entirely on the circulation of “greenbacks,” paper money backed only by the credit of the federal government. After the war, exactly when and how to return to specie currency became a contentious political issue that laid bare rifts between rural and urban America and between Northeastern elites and those in the West, Midwest, and South. Sound familiar?

In the late 1860s and early 1870s, Ohio Sen. John Sherman (best known for his antitrust legislation) pushed to get the U.S. to formally abandon silver and join the gold standard, which most European nations had adopted. He succeeded when Congress passed the Coinage Act of 1873, which ended the minting of silver dollars and stopped the U.S. Mint from accepting silver bullion in exchange for coins. To pro-silver populists, passage of the Act would later come to be known as “The Crime of ’73.”

The immediate victims of the act were mining interests. The discovery of large deposits of silver in the American West had driven the price of silver bullion down below the fixed rate paid by the U.S. Mint. Miners had been making good money presenting bullion to the mint in exchange for coin, a practice to which the act put a stop.

But the act wouldn’t have been so contentious if hadn’t been for the Panic of 1873, a financial crisis whose immediate cause was the collapse of several highly speculative, highly leveraged railroad companies, which became a yearslong economic depression. Caught in a deflationary spiral, indebted Midwestern and Southern farmers were rightly convinced that the tighter monetary policy caused by the Coinage Act was exacerbating their economic pain, and many pushed for a return to bimetallism in the hopes that it might spark an inflationary cycle that would make it easier for them to repay their loans. This united them in the “Free Silver” coalition with Western economic interests.

The Free Silver populists scored some early victories. In 1878, Congress returned silver coins to circulation and required the U.S. Mint to purchase, with paper money, between $2 million and $4 million of silver bullion each month to mint into coin. (You can think of this as the quantitative easing of its day.) When agricultural prices collapsed in the 1880s, many Midwesterners again saw unlimited minting of silver coins as a way to end deflation and help farmers escape their debts. In 1890, Congress passed the Silver Purchase Act, mandating that the government increase its monthly silver purchases by 50%.

But the Panic of 1893, which was caused in part by financial contagion from a crisis in Argentina, lead to a worldwide run on gold and a depletion of the U.S. Treasury’s gold reserves. Conservatives believed the fact that holders of silver-backed notes could redeem them for gold had inflamed the panic and, in response, later that year they repealed the Silver Purchase Act. This move stoked immediate outrage among the Free Silver movement and, as the panic gave way to a brutal, four-year-long depression, more and more impoverished farmers, miners, and even urban poor came to see salvation in the inflationary balm of silver. It was this righteous outrage that Bryan seized upon to catapult himself onto the national stage in 1896.

Bryan didn’t win the presidency that year and failed in a second attempt in 1900. But his championing of silver had a long-lasting impact on U.S. politics. So much so that in the depths of the Great Depression, pro-silver members of Congress from farming states, eager for re-inflationary measures to boost agricultural prices, succeeded in passing the 1934 Silver Purchase Act over the objections of Franklin Roosevelt. This law required the U.S. government to nationalize the country’s silver mines and use the silver production to mint coins. It also restored the U.S. Treasury’s issuance of silver-backed certificates and purchase of silver at above-market rates. It was repealed only in 1963.

Bryan’s legacy has lived on in a Main Street versus Wall Street populism that remains a rich vein of U.S. political discourse. Bryan’s targets were the nation’s city dwellers, and, in particular, the country’s Gilded Age manufacturing and railroad barons, and the Wall Street bankers and financiers who funded them. “The poor man is called a socialist if he believes that the wealth of the rich should be divided among the poor, but the rich man is called a financier if he devises a plan by which the pittance of the poor can be converted to his use,” is one Bryan quip. “The poor man who takes property by force is called a thief, but the creditor who can by legislation make a debtor pay a dollar twice as large as he borrowed is lauded as the friend of sound currency,” is another.

That certainly sounds a bit like the WallStreetBets crowd pointing out the alleged hypocrisy of hedge fund tycoons, who have often found ways, over five-figure lunches or exclusive investor conferences, to coordinate shorts and surf one another’s activist trades, but scream “market manipulation” when the hoi polloi gang up to put a squeeze on them.

Sure enough, Monday’s silver rally took on something of a stick-it-to-the-man tone. The hashtag #silversqueeze was a prominent rallying cry all weekend on Twitter, pulling in newbies in the hopes of landing a GameStop-like body blow on commodities traders.

Perhaps it was inevitable that the WallStreetBets crowd would turn its attention to silver. Ever since Bryan, it’s been the preferred metal of economic populism. Here’s one WallStreetBets denizen, who goes by the handle RocketBoomGo, urging the Reddit army to buy silver last week: “Think about the Gainz,” the user wrote, using the channel’s preferred stylized spelling of “gains.” “If you don’t care about the gains, think about the banks like JPMorgan you’d be destroying along the way.” And, later in the post, in urging his fellow investors to buy actual bars of bullion, rather than shares in silver ETFs: “Demand physical if you can. Fuck the banks.”

Now, Bryan and his followers weren’t looking to make money directly on silver—it was the economic impact of the metal’s use as specie they were after. And, as a fundamentalist Christian, he would never have used such choice language.

But the sentiments about J.P. Morgan and the banks? Bryan would have agreed wholeheartedly.

This story was originally featured on Fortune.com