We’re more than three-quarters of the way through the Q3 Earnings Season for the Silver Miners Index (SIL), and one of the most recent names to release its results is Fortuna Silver (FSM). Despite a 21-day shutdown at the company’s smaller Caylloma Mine, the company had a solid quarter, with silver production up 9% year-over-year. Meanwhile, the company finally announced its first gold pour at Lindero, which should lead to significantly higher metals production, and a surge in annual earnings per share [EPS], with estimates sitting at $1.04 for FY2021. Given the company’s industry-leading earnings growth due to triple-digit revenue growth projected next year, I continue to see the stock as a Speculative Buy at $6.00.

Fortuna Silver released its Q3 results last week and reported quarterly metals production of 2.13~ million ounces of silver and 12,800~ ounces of gold. This translated to an increase of 9% and 3%, respectively, even though the Caylloma Mine underwent a 21-day shutdown in the quarter. More importantly, though, the company’s Lindero Mine has finally poured its first gold after what’s seemed like an eternity of cost over-runs and delays. The final bill for construction of the mine is looking like it will come in at $315~ million, a massive increase from the 2017 Technical Report estimate of $239 million and the more recent budgeted cost of $298 million. Let’s take a closer look at the results below:

Beginning with the company’s San Jose Mine in Mexico, it was a decent quarter with 1.92 million ounces of silver produced and 11,400 ounces of gold. This was a 12% increase in silver production from the year-ago period and a 4% increase in gold production (Q3 2019: 10,900~ ounces). The improved results were driven by higher grades and higher recovery rates, offset by slightly lower throughput. During the quarter, the mine benefited from head grades of 254 grams per tonne silver and 1.52 grams per tonne gold, a significant jump from the 219 grams per tonne silver and 1.40 grams per tonne gold in the prior-year quarter. These higher grades also helped improve recovery rates, with recovery rates on gold and silver up 100 basis points year-over-year to 92%.

Despite the higher metals sales in the period, we did see a jump in all-in sustaining costs per silver-equivalent ounce, with costs coming in at $12.00/oz, up 11% year-over-year. This was due to higher royalties at the mine, as well as higher worker participation expenses. Fortunately, this increase in costs was more than offset by the strength in the price of silver (SLV), with the mine’s average realized silver price up from $17.33/oz to $24.87/oz. This led to a more than 90% increase in all-in sustaining cost margins on silver ounces, with margins jumping from $6.56/oz to $12.87/oz. It’s less clear whether the company will be able to benefit from the same silver price in Q4 with the metal’s volatility the past two months, but it’s nice to see the company selling its silver vs. stockpiling it like other miners. 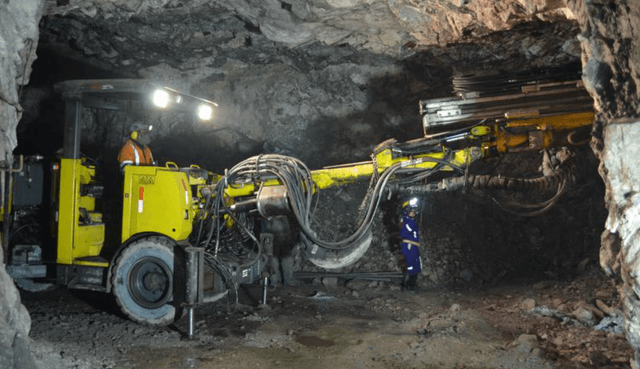 Moving over to the Caylloma Mine in Peru, it was a tragic quarter with a fatality of a contractor’s employee at the mine. Due to both COVID-19 and the devastating incident, Caylloma was shut down for 21 days starting in early July. Given the shutdown, mill throughput was down materially in Q3, with just 107,000 tonnes processed, down from 134,300~ tonnes in the year-ago period. While silver, zinc, and lead grades were up by double-digit percentages across the board vs. the year-ago period [silver: (+) 15%, lead (+) 18%, zinc (+) 13%], this wasn’t enough to offset the sharp drop in throughput. Therefore, production was for each metal in the period. The good news is that this is San Jose dwarfs Caylloma in metals output, so the lower production didn’t affect its consolidated output in Q3. 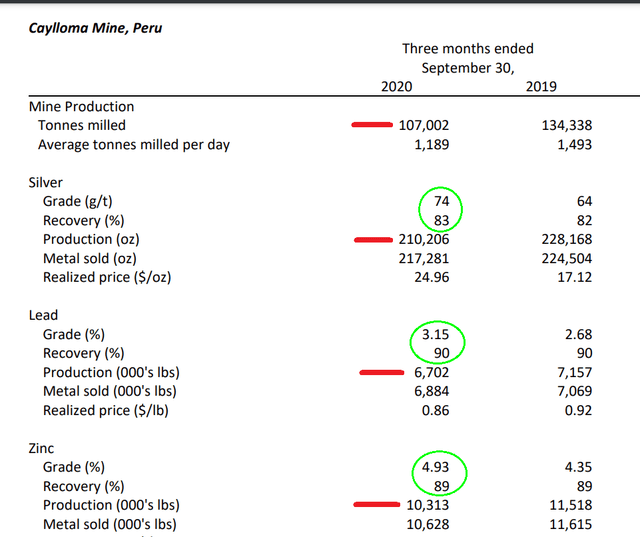 Given the much lower metals sales, all-in sustaining costs rose to $19.37/oz, up from $15.78/oz in the year-ago period. Year-to-date, all-in sustaining costs at Caylloma are up nearly 20% to $17.15/oz. The good news is that Caylloma remains on track to meet its production guidance, and we should see a much better Q4 given that the weakness did not come from grades but was instead directly related to lower throughput due to the shutdown. It’s also worth noting that the higher silver price more than offset the $3.59/oz increase in costs, with a $7.84/oz increase in the average realized silver price. Therefore, margins were not negatively impacted despite the weaker quarter operationally.

Based on the increase in metals production in Q3 combined with significantly higher metals prices, Fortuna had a blow-out quarter from a financial standpoint. As shown above, revenue hit a new 2-year high at $83.4 million, translating to 36% growth year-over-year. Meanwhile, free-cash-flow came in at $30.1 million, a more than 180% increase from the $10.6 million reported in the year-ago period. This has allowed the company to improve its balance sheet to $85.2 million in cash, and combined with Lindero set to begin commercial production in Q1 of next year; investors shouldn’t have to worry about shareholder dilution going forward. This is great news. In the past, I have avoided this stock in the past due to continued share dilution at unfavorable prices, which weighed on annual earnings per share [EPS], like the $69 million capital raise in May near 52-week lows.

As mentioned earlier, the good news is that we’ve finally got a light at the end of the tunnel when it comes to commercial production. Fortuna CEO Jorge Ganoza has reiterated that commercial production is on track for Q1 2021, and over 675,000 tonnes of ore were placed on the leach pads in Q3 alone. The grade of this ore was well below budget at 0.83 grams per tonne gold vs. plans for 1.05~ grams per tonne gold, but this was entirely due to delayed access to high-grade zones due to COVID-19. Therefore, there’s no reason to believe this is a recurring issue or a problem with reconciliation to the reserve model. Assuming the company can meet its Q1 2021 estimates, we could see Lindero generate over $185 million in revenue next year, with gold production of over 110,000 ounces at a conservative gold price above $1,720/oz. This is more than double the current quarterly revenue, which explains why we see such a bullish earnings trend below.

As we can see from Fortuna’s earnings trend, annual EPS estimates have continued to climb the past few months as we finally have some visibility into commercial production for the Argentinian mine. Currently, FY2021 estimates are sitting at $1.04, and this would translate to 550% earnings growth year-over-year if Fortuna can meet these estimates. In the past, the company has not been one to under-promise and over-deliver, so it may be best to err on the side of conservative even with these analyst estimates. However, even if annual EPS comes in at just $0.90 per share for FY2021, this would still translate to over 450% growth. Based on a share price of $6.25 and a conservative estimate of $0.90 in annual EPS for FY2020, Fortuna is trading at a very reasonable 6.95x FY2021 annual EPS estimates.

Fortuna Silver has been one of the most disappointing investments in the silver space for years, and long-term investors have every right to be disgusted with the cost over-runs and delays at Lindero. However, for new investors that haven’t had to suffer through almost two years of dilution and over-promising, further weakness in the share price should provide a buying opportunity. As noted above, Fortuna is trading at 6x FY2021 annual EPS estimates ($1.04) and roughly 7x conservative estimates of $0.90. Obviously, there are safer plays out there in Tier-1 jurisdictions. Still, the reasonable valuation and triple-digit earnings growth in FY2021 makes this an interesting play for investors willing to take on more risk. Therefore, I continue to see the stock as a Speculative Buy at $6.00, and there’s significant long-term upside here if the Lindero Mine can deliver and gold prices stay above $1,700/oz.

Disclosure: I am/we are long GLD. I wrote this article myself, and it expresses my own opinions. I am not receiving compensation for it (other than from Seeking Alpha). I have no business relationship with any company whose stock is mentioned in this article.

Additional disclosure: Disclaimer: Taylor Dart is not a Registered Investment Advisor or Financial Planner. This writing is for informational purposes only. It does not constitute an offer to sell, a solicitation to buy, or a recommendation regarding any securities transaction. The information contained in this writing should not be construed as financial or investment advice on any subject matter. Taylor Dart expressly disclaims all liability in respect to actions taken based on any or all of the information on this writing.