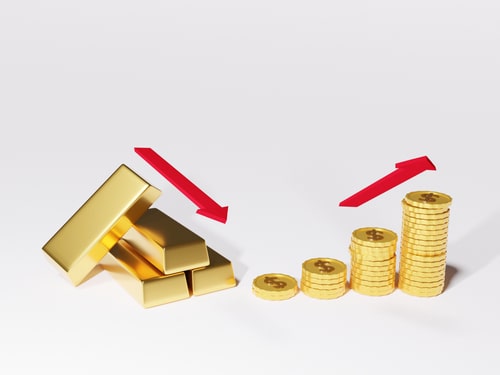 (Kitco News) Precious metals investors were taken for a ride Friday when gold and silver plunged 4% and nearly 10%, respectively.

The increases in the U.S. Treasury yields and the U.S. dollar were the main reasons behind this massive selloff, analysts told Kitco News on Friday.

Despite massive daily losses, the move lower might not be over just yet, according to analysts.

“Right now, for the most part, rising Treasury yields provided a bid for the dollar, responsible for the selloff in gold,” said OANDA senior market analyst Edward Moya. “There is too much institutional interest diversifying away from gold. There’s a big fear that the ETF holdings will drop as President-elect Joe Biden is expected to be more successful at squashing the COVID-19 pandemic. Gold is seeing intense technical selling.”

The gold space would see $100-moves in the next couple of days, added Moya, telling investors to pay attention to the U.S. dollar.

The greenback bear-trade has become overcrowded as the dollar’s bearish positioning reached a decade-high level at the end of 2020, he said.

“There was consensus on Wall Street that the dollar will extend its weakness with the Federal Reserve being the last central bank to raise rates. But what happened was the dollar’s bearish trade was overcrowded. We are seeing the dollar rebound, and some gold bets are unwinding in the process,” Moya said.

The economic outlook also remains very uncertain, with the U.S. reporting a loss of 140,000 jobs in December amid tighter lockdowns and a record number of coronavirus deaths.

“There are two catalysts right now that are causing gold to sell off. Rise in bond yields and the economy looking in trouble. This is causing liquidation and flight to cash,” said Kitco Metals global trading director Peter Hug. “Friday’s employment data also indicates that the U.S. economy could be in trouble in Q1.”

The usual market reaction to bad economic news is a move into cash, Hug explained. “Money is getting out of gold and going into cash, into the equity market, or ten-year bond yields,” he said. “There has also been a disappointing vaccine rollout. It will get worse before it gets better.”

More and more analysts agree that bitcoin is stealing attention away from gold, and the regular inflows that would have gone into the yellow metal because of its safe-haven allure are now going into bitcoin.

“There’s a big fundamental shift for many investors,” Moya said. Gold’s safe-haven trade has taken a back seat to the cryptos, especially bitcoin. When you look at gold’s positioning, you see a diversification away from gold into cryptos.”

However, even though the allure of cryptos will weigh on gold in the short-term, the bitcoin bubble will eventually burst, said Moya. “Inflation hedge is likely to support much stronger gold prices,” he added.

Many analysts agree with this assessment as they view the gold’s bullish case for this year still intact.

What happens when the gold price drops below $1,800?

The big line in the sand for next week will be the $1,770 level — which was the November low, said Moya.

“I’d like to see gold hold around $1,850. Everyone will focus on the November lows. We did see prices go just below $1,770. I would be surprised to see $1,800 breached,” he said. “You are going to see that prices will eventually stabilize.”

Lusk added that dips to $1,850 had been bought in December, which is what might happen now as well.

LaSalle Futures Group senior market strategist Charlie Nedoss warned that a move below $1,820 would trigger “stops that are under there and $1,800 would be next.”

The key datasets to watch next week include U.S. inflation numbers on Wednesday, jobless claims on Thursday, and PPI, along with retail sales on Friday.

“Retail sales fell heavily in November, and another soft outcome is expected in December, especially given the stay at home order in California, the U.S.’s most populous state. Google mobility data suggests people traffic in retail and recreational areas has been moderating, and with less movement around the holiday season, we suspect there was less gift buying as well,” said ING chief international economist James Knightley.

Federal Reserve Chair Jerome Powell is also scheduled to speak next week on Thursday at the virtual event hosted by Princeton University Bendheim Center for Finance.

“Next week, we will have a lot of Fed speak. And now that the 10-year Treasury yields are at 1.10, this could alarm the Fed. They want the curve to steepen, but they don’t want it to happen in one move. The Fed might become more vocal when it comes to yield curve control. They have a ballooning deficit, they can’t have rates go up too high. It will spell trouble,” Moya said.