It was more than a trifecta of events that sparked today’s sharp gains in both gold and silver. First and foremost is the global pandemic that has resulted in economies worldwide contracting. This led to central banks revising their monetary policies to be more accommodative as they attempt to diminish the contraction so that economies can start to stabilize and eventually begin to rebuild.

Secondly is also a direct result of the pandemic; massive expenditures from fiscal stimulus. The U.S. allocated $3 trillion to fund the “Cares Act” to help individuals and businesses gravely affected by the pandemic.

Which leads us to the third event, the recent presidential election, and how the outcome might affect the size and scope of any upcoming fiscal stimulus bill. Although they are still tabulating the votes and have not officially announced a winner it seems highly likely that the next president of the United States will be Joe Biden. The need for more fiscal stimulus is based upon the continuing economic contraction.

Although President elect Biden will still be challenged by a Republican majority Senate, it seems plausible that his plan for fiscal stimulus could be much larger than if the incumbent President Trump had won a second term in office.

In a Note, Fawad Razaqzada, analyst at ThinkMarkets said Gold “has found decent support after the likely outcome of U.S. presidential election — that is, a Biden victory and a split legislature — has raised speculation that conditions in the world’s largest economy will remain supportive for all sorts of asset prices, including gold. He also wrote that “Investors are betting that a potential Biden win will pave the way for a bigger fiscal stimulus package than would have been the case if Trump was re-elected, while a Republican-controlled Senate will make it unlikely that Trump’s corporate tax cuts will be rolled back.”

The fourth event that could create uncertainty or at least havoc is if President Trump loses the election and contests the results. America has spent the last 200+ years and prospered because our founding fathers created a system than inherently has checks and balances by a government into three branches. But a cornerstone of our longevity as a country is due to the fact that there has always been a peaceful transfer of power from one president to the next. This is the cornerstone of our democracy. If President Trump chooses to contest the election results, nothing good could come out of that scenario except increased uncertainty.

Lastly is dollar weakness which aided in today’s dynamic rally in both gold and silver. As of 4:22 PM EST the most active December 2020 gold futures contract is currently fixed at $1950.60 which is a net increase of $54.40 on the day. Although gold had a respectable gain of 2.85%, it was silver that had the most stellar performance gaining 6.66%. The December silver futures contract is currently fixed at $25.47, after factoring in today’s gain of $1.58. 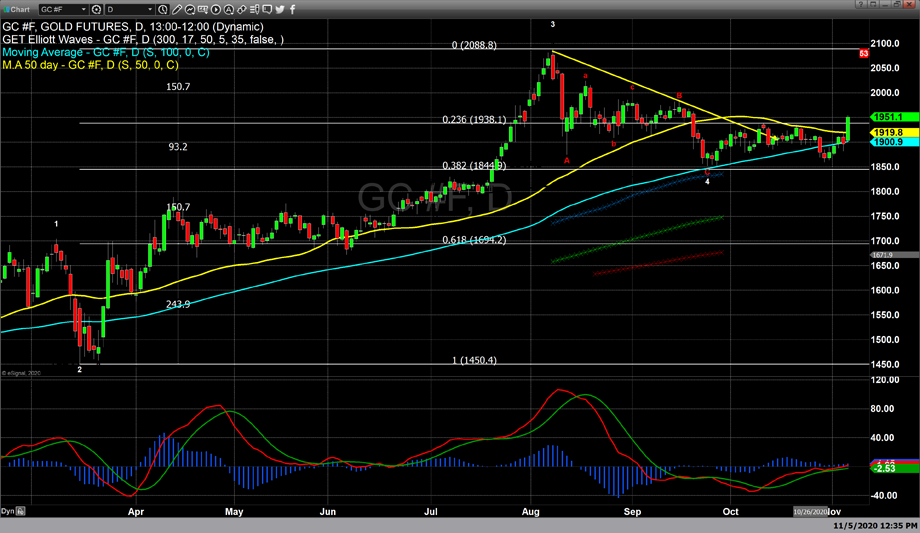 However, dollar weakness only accounted for approximately one third of today’s gains. This can be illustrated when we look at the KGX (Kitco Gold Index). The index has spot gold currently fixed at $1950.50 which is the result of today’s gain of $47.90. The vast majority of those gains were a direct result of traders bidding the precious yellow metal higher which accounted for $32.10, with dollar weakness accounting for the remaining $15.80.

The term a “perfect storm” is commonly referred when multiple events collectively create a synergistic effect where the sum of the parts are greater than the parts alone. While I believe this term is used to commonly, in the case of recent events it is the best description for what we are witnessing.

For more information on our service simply use this link.

Wishing you as always, good trading and good health,